View Competitions Back to search 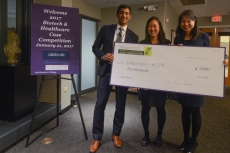 It is the biggest business school case competition with the longest history in the healthcare space, sponsored in recent years by the biopharmaceutical company AbbVie, that brings together MBA-student teams from business schools nationwide.

The 2022 competition was sponsored by Moderna.

This year’s event was largely in-person, with a few presenters joining by Zoom.

Information on the 20th annual event in January 2023 will be available in September.